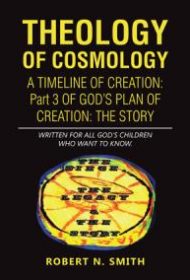 In the follow-up to his book God’s Plan of Creation, retired Navy veteran Robert N. Smith combines philosophy, science, metaphysical studies and spirituality to explore the enigmatic topic that still baffles religious thinkers and scientists: consciousness, or the state of awareness of our inner and outer lives.

Although he never mentions it by name, Smith draws inspiration from the little-known, mysterious The Urantia Book, an anonymous, channeled work supposedly presented to the world by celestial beings that came out during a New Thought revival in the early- to mid-20th century. Like that book, Smith’s work looks to broaden our understanding of why we are here and explore the nature of God, creation, prophecy and the intricate relationships between heaven and earth.

Inspired by the Urantia mythos, Smith’s lexicon is unfamiliar to most religious readers. “Nebadon,” the sphere of reality that contains the earth, and “Christ Michael’s Commission for His 7th Bestowal” aren’t usual theological fare. Smith does his best to present his ideas and chart humankind’s shift in consciousness by providing graphs and highlighted material framing a complex cosmology around Jesus. It is Christ, Smith argues, who offers us the possibility of increased divine awareness.

Theology of Cosmology is an imposing yet flawed text that combines stream of consciousness with a swirl of out-of-the-box ideas. Smith handles the material on the Seven Master Spirits (divine expressions of God) and the Isle of Paradise with great zeal. Yet the book is marred by awkward phrasing (e.g., “The remainder was tried, rebels tested and were loyal”), choppy prose (“Every world will have ONLY ONE Spirit born Son that will be born, begotten, into that world as one of that world and will raise the spiritual consciousness of that developing world”) and disorganized ideas.

These shortcomings put considerable demand on readers who may already feel lost by the unfamiliar ideas found in these pages. As such, most will find it an extremely challenging read.