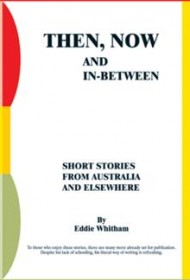 The 68-year-old Australian who wrote these short-short stories–39 of them in just 222 pages–is a former retail merchant who has spent much of his retirement traveling with his wife. That surely accounts for the pieces’ farflung settings–Israel, Hungary, Ukraine, an Austrian ski resort, and a dozen other places. But author Eddie Whitham has also served as a lay preacher for the last 25 years, and that may account for the dominant form of his work, which is quasi-religious parable.

In one story, an Italian drug dealer gets his comeuppance when a Thai assassin kills him with an exploding Bible. In another, at a campfire on the banks of the Jordan River, an old woman explains why her husband keeps a scrap of bread in his pocket–he was always hungry at the concentration camp. In “The Store of Souls,” just 51 lines long, the Grim Reaper exchanges world-views with the Almighty.

Whitham favors plain prose and gentle moral suasion, usually delivered in the last paragraph. For instance, “The Coin of Contentment,” which glimpses three generations of an Irish family, ends with the revelation that the beloved object of the title is “engraved HEADS on both sides.”

The author, who tells us in an afterward that he dropped out of school at age 15 and has sought to educate himself ever since, writes with considerable charm and feeling about his native Australia: his brief yarn about a devoted mailman who drowns while on his rounds in the Outback is especially poignant, and he’s quite funny when addressing the lunacy of cricket and Aussie Rules Football fans. Whitham’s approach to writing fiction is simple and straightforward, and in this readable collection, his generous spirit never wavers.