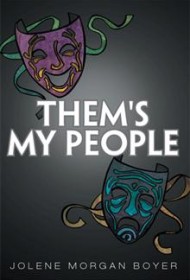 These 30 brief, folksy—and often violent—fictional character sketches by rural Kentucky native Jolene Morgan Boyer offer a scattershot look at life in hardscrabble Appalachia from the 1850s to about 1970.

Included in these stories, a vengeful wife called Nervy Jane catches her husband’s mistress en route to the house and promptly busts her in the crotch (aka her “playpen”); a banjo-picking moonshiner turns his wife over his knee after she dances naked at a drunken party; a hellion named Suzy-Q beats her boyfriend in the face with the clutch of dead squirrels he’s brought as a gift. And the back-hollow topper? In a three-page, family-feud sketch called “The Warsaw Cousins,” a young man steals the underwear of his nine-year-old cousin as she lies in her coffin, dead from cancer.

Devotees of Southern Grotesque will find faint echoes of William Faulkner, Carson McCullers and Flannery O’Connor in these little yarns, which are drawn from author Boyer’s childhood and Kentucky folklore. But the tales don’t cohere with each other, and the writing is often flat: A disappointed husband, for example, finds in the failed trade of his blue wedding suit for a no-good beagle hunting dog “a giant lesson in life.”

There’s enough disconnected material here to furnish a collection of short stories, even a novel or two, but Boyer needs to shape, expand and further dramatize the rich but raw goods she has on hand—the rage, lust, angry gunfire and occasional good-heartedness of country people struggling to survive their wits’ end. “Starved slap-dab to death” by deprivation, Boyer’s embattled homefolks could certainly use a more articulate voice— and with some work she may be the one to provide it.