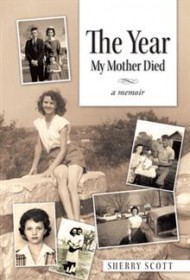 This memoir chronicles the 12 months following the death of author Sherry Scott’s mother. It’s a year that challenges the palliative pediatrician’s long-held ideas about grieving, surprising her with an unexpected “burning desire to return to adolescence.”

While set in the present, a great deal of the story takes place in the past as Scott’s grief takes her increasingly down memory lane. She writes about childhood holidays, summers in Texas, neighborhood friends and the music of her youth – the ‘70s. Four months after losing her mother, she hears an old Todd Rundgren song and becomes fixated on the singer, watching his videos on YouTube and eventually going to a concert.

“Unbeknown to me at the time of all this obsessing and pining over a ‘70s rock star, the artist himself was at work on his twentieth solo album, Arena …” she writes. “He chose his sixtieth birthday party that June to introduce the new CD and kick off his tour, which arrived in Dallas … Struck by the timing of all this, I ended up purchasing four tickets just to secure the best seats I could in order to get a good look at this icon.”

The concert seems to assuage her fascination with Rundgren, but Scott remains mired in nostalgia for her youth, by turns angry and depressed over the “relentless march” of time and dreams never pursued. In the end, she begins to make some peace with her process, realizing that there’s no timetable for grief.

This is an intelligently written memoir, but despite the sorrowful subject, it seems to lack emotional resonance. So much of the story takes place in the past that there’s a sense of waiting for that big moment in the present to finally occur, and it never really does. Nonetheless, there are many universal moments here that children of the ‘70s in particular will appreciate. Likewise, any woman who has lost her mother will relate to this tale.