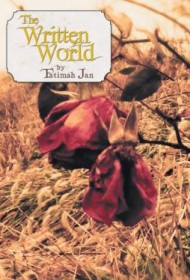 In this remarkable fantasy novel, eighth grade writer Fatimah Jan tells the story of another young girl, Sophie Bennet, who is entrusted with the mission of conjuring and saving a world by writing her own book called The Written World. The book fits into the tradition of writers such as C.S. Lewis who take groups of spunky siblings on adventures into magical worlds that are in the thrall of evil.

Jan’s book begins when the mysterious stranger Layla presents the daydreaming Sophie with a notebook and beautiful pen, and tells her to fill the pages “because a whole world needs your help.” Sophie spends a few years creating an imaginary world, as her own life wrenches her and her thee siblings away from home after the deaths of their parents, to live with an uncle.

The borders between fantasy and reality are broken when Sophie begins to read her work to her siblings and the children are soon thrust into the world of Calista, where the evil Veronica has prevented her sister — the rightful young queen, Evangeline — from taking the throne. Regarded as “prophesies” personified, the Bennet children are given magical weapons as they take up the quest to find a ruby that, when restored to Evangeline, will break the dreadful spell that Veronica has cast over Evangeline and Calista. Along the way, the children encounter other fairy-tale figures, including Snow White and Red Riding Hood.

Jan’s youth is revealed in occasional awkward phasing, but even when that is the case, her writing can be intriguing, as in, “From the east to the west and from the north to the south, the sky collided with different colors of the day….Looking straight up into the blue, Sophie was lost in her imaginations.” But Jan’s true achievements lie in building a fantasy world, and in creating believable children who take action while growing closer at a vulnerable time in their lives.

This story will appeal to young and adult readers of traditional quest fantasies featuring children. If Jan’s skills continue to grow, it may well become a coveted collector’s item one day.