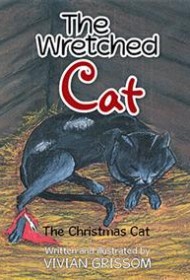 Vivian Grissom has written and illustrated a Christmas story connecting the birth of the Christ child with the origin of cats’ nine lives.

On a frigid winter night in Bethlehem, an irritable stray cat struggles to cross the road. Locals call him “The Wretched Cat” because of his disheveled appearance. When he finally makes his move, a camel steps on his hind legs, and the poor injured beast drags himself to a stable where the resident animals aren’t welcoming. Exhausted, lonely and in pain, the cat crawls into a corner and passes out.

When he awakens, Mary, Joseph and the Christ Child have joined him in the stable. Shepherds arrive and explain that an angel has appeared announcing the birth of the Savior. Later, the cat wakes up to find a nasty rat about to bite the child. Gathering all his strength, the cat bats the rat away, and suddenly an angel appears in a flash of light. The cat is rewarded for his good deed with restored health and the gift of nine lives.

While potentially compelling, this story contains elements that may disturb young readers. The cat is described as “scarred from head to toe,” with a “nearly severed ear” and “big chunks” of fur missing all over his body. After the camel steps on him, readers learn that he “had a bone sticking out and blood was gushing all over the ground.” With “foam coming out of the corner of his mouth,” the rat is equally gruesome, his threat to the innocent Baby Jesus terrifying.

In addition to these grisly images, the story is marred by poor punctuation, typos, grammatical errors and missing words.

The Wretched Cat could be a charming Christmas tale that also cleverly explores an old wives tale. But it requires revision to remove its gory edge and professional copyediting to clean up writing errors before it’s ready for a wide audience.