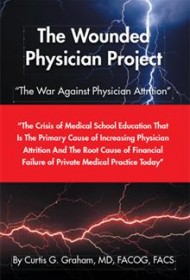 The Wounded Physician Project presents a sound premise: that young people entering the medical profession should be taught business principles to succeed as future doctors.

The author, Dr. Curtis G. Graham, reflects on his 52-year medical career as an OB/GYN and finds the system wanting. He offers the scenario of the private practice physician whose patient base is diminishing and, as a result, is unable to pay the bills.  “I’ve been there and no physician should ever be confronted by such a catastrophic crossroads of complete hopelessness,” he writes. His solution: to task medical schools with providing business education (a moral imperative repeated continuously throughout the book).

But altering medical school curriculum is no small feat, and Graham recommends substituting business education for some of the medical courses, a solution that seems dangerous at best, when today’s doctors are expected to harness an astonishing array of cutting-edge knowledge.

Additionally, many of the statements the author uses to bolster his argument read more like opinions rather than substantiated fact. Unattributed generalities are common: for example, he states that “…99 percent of doctors have no office procedure manuals.” While possibly true, the source of the statistic isn’t cited, and the lack of such documentation undermines the credibility of this radical treatise, which also suffers from heavy-handed overuse of bold and italic fonts, as well as statements that appear boxed for no reason.

The book could serve as a cautionary tale to those considering embarking on a private practice venture about the importance of learning financial basics; some sections even offer suggestions on how to obtain this sort of guidance. But the majority of the writing feels like a rant, rather than useful instruction about how to reinvent the system.

Clearly, it’s a good idea for medical students to be trained in business. This book simply doesn’t offer plausible and convincing direction on how that might be achieved.