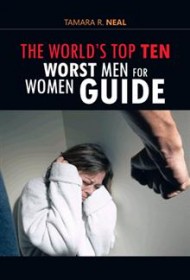 Bad boyfriends beware. Tamara R. Neal, author of The World’s Top Ten Worst Men for Women Guide, is on your case. Neal, who was told 20 years ago by a psychic that she would one day write a book to help women, has aimed to fulfill the prophecy by alerting sisters to the top ten kinds of guys who spell t-r-o-u-b-l-e. Or, as the author bluntly writes: “There are some men out there you really don’t want to meet.”

Who are these menacing men? Neal’s list is unfortunately rather obvious: explosive guys, incarcerated men, child molesters, deadbeat exes, abusers, drug addicts and drunks, gay guys who are “down low” (DL) and married players. (Don’t women already know that they should avoid these types?) On the plus side, since these men aren’t wearing T-shirts announcing their shortcomings, Neal describes, often with humor, their telltale signs: For example, the player will “… fail in the sexy underwear department because leaving the house in his sexy underwear … will arouse his wife’s suspicion.” And the abuser “… constantly accuses you of being sneaky and unfaithful. You can’t even go to the bathroom and close the door without him wondering if you are dating the toilet paper.”

Neal admits to having been in several destructive relationships herself. As a result, her voice is honest and accessible, although it frequently falls into clichÃ©s, such as: “None of us is perfect”; “Be the best person you can be.”; or “Don’t wait until tomorrow to fix something you can fix today.” Women looking for fresh insights may have a tough time finding nuggets worth remembering here.

Still, her girlfriend-to-girlfriend approach has charm. And if readers don’t glean anything new here, they might find inspiration from the photographs at the book’s close. In one, Neal is embracing her beaming husband. Clearly, she has learned her lesson — and that may give readers hope that they can achieve the same.