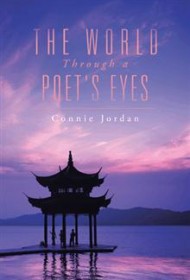 The World Through a Poet’s Eyes  is a slim volume of poems exploring the author’s faith in God, as well as myriad other subjects.

In “Faith,” the speaker explains that due to “living my life based on His rule, / I know I can never lose…”  “Remembering the You of Our We” explores a lost love, while “Survival” decries another’s attempt to define the speaker (“I see what, over the years, you have tried to prove/about me…”). Other poems touch on the need for self-respect,  the push-pull between men and women and even President Obama.

The pieces often seem more like prose divided into stanzas, rather than crafted poetry. They are strongest when the author draws scenes, instead of offering prose-like rumination. “Bullies,” for example, opens with kinetic imagery and uses language musically: “Bullies running through the halls, wreaking havoc on those they meet, / out of control, ready to beat, who they judge to be geeks and freaks.”

Such moments are too few and far between, however. Too many of the poems collapse into conclusions that feel generic, as in the end of  “Rain,” which explains, “Recognizing the usefulness of the storm, I resign / myself to its powers…knowing / nothing grows without the storms…” The poems answer their own implicit questions, leaving no space for readers to dwell in complexity.

Also, Jordan’s writing at the sentence level is often grammatically disorganized, as in “Men vs Women”:  “Men telling lies to get the goodies, exposing the depths of their / depravity, until being told of the pregnancy, they created, only then / do they decide the relationship will not survive through time.”

While readers are likely to appreciate the sentiments in the poems, the writing lacks the craft needed to engage an audience throughout. Revision with an eye to vivid detail would greatly improve the work.