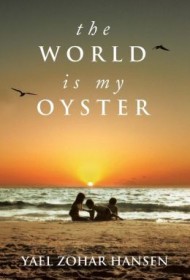 With the National Institutes of Health now reporting that one in four adults suffer from mental illness and as lawmakers are finally starting to pay attention to its complexities, Yael Zohar Hansen’s memoir, The World is My Oyster, could not have come at a better time.

Hansen writes of her difficult re-entry after a lengthy hospitalization for paranoid schizophrenia. As a young wife and mother, she struggles with fear, blame, embarrassment, and the wobbly path toward finding “normal” again. “Yesterday has truly gone,” she writes. In one of the more touching passages, she describes how even the simple task of brushing her hair eludes her and how her daughter does it for her. Readers will wish for more of those moments to truly understand how crippling mental illness can be.

Hansen is an accomplished writer—at times lyrical: “I feel like being admitted to the hospital was rather like the falling leaves of a tree in autumn when I was laid bare and open, fragile…”

But she seems too often to pull back, retreating into a series of personal affirmations that she perhaps repeats to herself: “The thoughts we choose to think are the tools we use to paint the canvas of our lives.” Perhaps these are learned phrases to help her heal, but they ultimately distance her from her readers. As painful as it might be, it would have been a richer book had she given more detail about her illness and its genesis (she briefly talks of being given the choice of voluntary or involuntary committal), as well as delving deeper into the rebuilding of the relationships her disease damaged. She hints at a rocky marriage but never describes it; her children’s reactions are similarly glossed over.

This may be a first toe-dip effort and it’s a noble one. Readers can only hope that she continues to write and will, perhaps, one day flesh out her story.