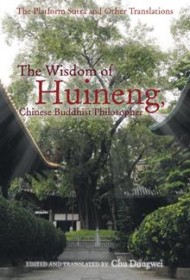 This translation with commentary of The Platform Sutra and other works associated with the great Chan (Zen) Buddhist master Huineng (638-713) both informs and inspires. It serves a dual purpose: presenting an insider’s view of the translator’s craft, and imparting a new perspective on a classic treatise that opens doors to understanding Chinese religion, history and culture.

Huineng was a Chinese peasant who, despite his lack of religious training, became enlightened in the presence of Hongren, the Fifth Grand Master. Because of Huineng’s humble origins and the possible jealousies among his established following, the master kept his enlightenment a secret, but eventually Huineng claimed the robe of his office to become the Sixth Grand Master. He composed an autobiographical and spiritual work, The Platform Sutra. Shenhui, his primary disciple, carried on his teachings after his death.

This book comprises Huineng’s story along with writings associated with Huineng and Shenhui but not always included by other translators, such as some short biographies and epitaphs. Associate Professor Chu Dongwei, who edits the online journal Chinese Literature and Culture, took on the challenge of translating Huineng’s texts after attending a Buddhist conference years ago. Though not a Buddhist, he found in the writings of Huineng “a democratic vision of the world.”

In the Foreword, he describes his steps in translating one of Huineng’s profound “gathas” or poems.  Readers of The Wisdom of Huineng will find his grasp of English exceptional and his explication of his approach to translating helpful. And as he so aptly observes, though Huineng’s work has been rendered into English before, “one more translation does no harm,” a sentiment that mirrors the philosophy of Huineng himself, who observed, “My teaching of Dharma is a timely rain to everyone on this planet.”