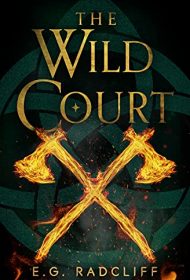 The Wild Court is a fast-paced YA fantasy, following the adventures of Áed, the King of the Gut, as he seeks to defend his realm from warring factions of fairies whose battles have spilled across the veil that separates the fae and human worlds.

Among the fae people, a huge war is underway, triggered by the disappearance of the consort of the fairy Queen. Áed chooses to cross the veil himself and attempt to broker a peace deal. It’s a dangerous mission, and to succeed he must also confront his own links to the fae world.

Áed is an attractive central character. Only in his mid-20s, he’s a thoughtful and conscientious leader who has hidden his fae blood from everyone but his chosen heir, Ronan, a lively teenager who chafes at the restrictions of palace life. Both travel into the fae world, accompanied by Éamon, Áed’s close advisor and possible same-sex love interest, and Erin, a wisecracking fae girl who acts as their guide. Throughout the twists and turns of this adventure story, even secondary characters are well fleshed-out and compelling, producing a pleasing blend of action and emotional drama.

E.G. Radcliff is a talented world-builder, with a clear and well-communicated vision of her human and fae worlds, including traditions, social conventions, magic, war-craft, food, and language. Descriptions are lush but never slow the action. The plot is inventive, and clever use of dialogue keeps the information flowing without overwhelming the reader. It also adds a strong element of humor, although italics are overused for emphasis at points.

The Wild Court is the third and final installment of the Coming of Áed, and can be read as a standalone story, but readers may prefer to experience the books in order, as there’s little to no recap given to explain references to past times and earlier characters.

Overall, this is a highly engaging epic fantasy that should have wide appeal.