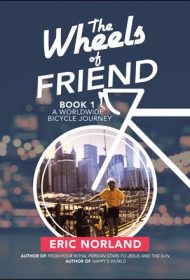 Book 1 of The Wheels of Friend by Duluth, Minnesota-born Eric Norland recounts the first year of his around-the-world cycling adventure in 1983 at age 28.

The idea began taking shape in 1978, soon after Norland graduated from college with a degree in fine arts. His first jobs out of college, as a mechanic and then a draftsman, led him to question what he wanted from life and fueled a desire to experience the world more fully. Thus, Norland hatched a plan to cycle across the world to meet people and discover and share their universal decency and humanity while also having an epic adventure.

Five years later, Norland took the plunge. He bought a touring bike he named Friend. Packed with camping gear and supplies, he pedaled from Santa Barbara to New York, then flew to Europe and cycled across the United Kingdom, Holland, Germany, France, Italy, Greece, Turkey, Israel, Egypt, India and into South and Southeast Asia. Along the way, he met colorful characters, received incredible hospitality and kindness, had a few close calls (such as nearly being hit on the German autobahn and cycling over a large snake in Thailand), and made many friends (including innumerous romantic interests).

While the book admirably documents an era when traveling without reservations and advance plans was the norm, it suffers seriously from a lack of editing. Norland seems to have transposed his journals of the trek with few changes. He recounts the blow-by-blow details of each day, offering far too much information that doesn’t advance the story. The narrative also delivers few insights into how the journey transformed Norland and no conclusion; the last page ends in mid-action – and, tellingly, with a comma, not a period.

With a tighter narrative focusing only on key events that shaped Norland’s journey, The Wheels of Friend could fulfill the author’s original intent. As is, there’s simply too much extraneous information to sort through in these many pages.