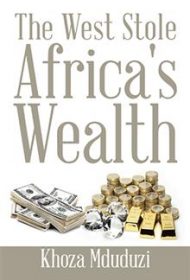 This well-reasoned but overlong analysis of Africa’s woes, past and present, turns on a pair of familiar arguments. One: Europe’s plundering colonizers promoted poverty and internecine war in Africa long after they abandoned direct rule, and they had help from the U.S. Two: the benighted leaders of African liberation movements in new nations like Zimbabwe, Angola and Uganda often betrayed their citizens through corruption and by embracing political freedom at the cost of economic freedom.

A South African educator and self-proclaimed “critical rationalist,” Khoza Mduduzi comes across as a deeply aggrieved and worried man—with reason. Without a concerted effort by its leaders, he writes, “Africa is likely to lose most of its young and bright minds because of the drug addictions and drug-related crimes.” He also seems pessimistic that nations “still under political quagmire,”  such as Zimbabwe, the Central African Republic and the Democratic Republic of Congo, are capable of producing “their own Nelson Mandela,” the savior of his beloved South Africa.

Within a loose structure, the book moves from the history of slavery and oppression in Africa to the mixed results of liberation in a dozen nations. Throughout, the author supports his opinions with ample citations from African newspapers, academic histories, folklore and personal experiences.

As it advances its two central theses again and again, the book can be repetitious and sluggish, but the author occupies always the moral high ground when it comes to the depravities of Africa’s French, Portuguese and British occupiers and the self-enriching instincts of some contemporary figures. He also has some fascinating views of controversial figures; for example, Longtime Zimbabwean dictator Robert Mugabe and Iraq’s Saddam Hussein are praised for defying the all-devouring West.

Clearly a labor of love, this is a passionate, if often-overwrought, narrative. Despite its repetitiveness, The West Stole Africa’s Wealth may prove useful to African citizens and academics studying the continent’s troubled history.