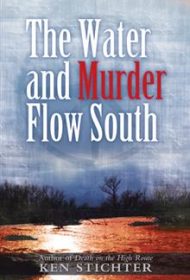 The Water and Murder Flow South begins in 1945, when two men meet their deaths at the hands of the Los Angeles Department of Water and Power. Then the narrative shifts to the present day, as Rob and Sti, retirees who share a love of backpacking and a 45-year friendship, find themselves investigating two other deaths connected to the DWP.

At a museum benefit, Sti meets Marti Fisher, who knows of him through news reports of his and Rob’s previous investigation. Marti’s husband, Rod, and their young daughter died in a car accident 25 years ago. Rod worked for DWP, and Marti is convinced the department had him killed.

Semi-reluctantly, Sti and Rob agree to take the case. Their investigation takes them far afield, both geographically and historically, as they find that Rod’s murder ties in to the 1945 deaths and to a conspiracy of corruption that lingers in the present day.

The moonlighting detective novel usually lives or dies on the strength of its protagonist(s), and Stichter has succeeded in creating two compelling characters. Sti and Rob are delightful everymen whose banter and philosophical musings enhance the story. The men’s love of both literal and metaphorical wandering and their acknowledgement that not all mysteries can be tidily solved add a depth sometimes absent from the genre.

One quibble: Various characters’ repeated summaries of key developments sometimes bog the novel down. The plot is fairly complicated, but it is explained clearly enough that this repetition feels unwarranted.

Overall, however, this is a clever, appealing mystery that will likely leave readers eager for Sti’s and Rob’s next adventure.