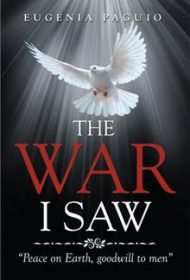 Having lived through the invasion and fall of the Philippines to the Japanese, Eugenia Paguio bears witness to a little-known (to Americans) piece of WWII history in her memoir, The War I Saw.

Paguio was a child when the Japanese bombed Pearl Harbor, bringing the U.S. into WWII and  Paguio’s life as American and Filipino soldiers set up a stronghold in Bataan. Japan invaded Bataan, and her family fled to an evacuation center. When Bataan eventually fell, they returned to find their house occupied by Japanese soldiers. In her backyard, Paguio watched the commanding officer beat an unarmed Filipino civilian she knew nearly to death. Soon, her father died of dysentery after treatment by a Japanese doctor, who Paguio believed killed him. Thousands of POWs perished on the Bataan Death March.

Paguio’s distinctive voice often sounds like the terrified fifth-grader she was when the Japanese attacked; just as often it reveals her rage. Although her lingering anger at her country’s former nemesis is understandable, today’s readers may have difficulty countenancing her use of pejoratives, such as “Jap” or “Japhobia” (fear of the Jap).

When describing events, Paguio often switches from past to present tense, as though she’s reliving the moments; this can be effective although it can also feel clumsy. In her epilogue, Paguio says that her writing was therapeutic. While writing, “I couldn’t control my tears as if all the pent-up sorrows and sadness were coming out of my heart and soul. After I had finished writing the whole story, I felt very light … as if a heavy burden was lifted.”

Paguio set out to chronicle a forgotten moment of history. The resulting work seems to have been a personal catharsis for its author. As such, it may not appeal to a wide audience. But those interested in this slice of history should find The War I Saw an informative read.