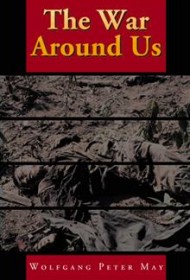 Born in Nazi Germany during the height of World War II, Wolfgang Peter May fled the bad memories with his family and eventually settled in Canada, then the United States. He attended high school in Indianapolis, and college in Huntsville, Texas. From an early age, May developed a pacifist outlook, yet felt pulled to enter the military of his adopted country to serve during the American invasion of Vietnam.

The result is an episodic memoir filled with cognitive dissonance: May worries frequently about killing innocent civilians among “the enemy,” and yet ends up in situations where such deaths seem inevitable as he must battle for his own survival.

Most of the book is a detailed account of May’s combat experience in Vietnam. After he leaves the military, though, he tends to oppose the cruelty resulting from American incursions into Afghanistan and Iraq, among other military targets. In the opening essay–the first of more than 100 in the book–May comments: “There has never been a good war, or a bad peace. Since there is no other way to ensure the survival of our human species, we desperately need to work toward a just peace on this fragile and God-given earth! He alone has appointed us to serve as his responsible guardians, not as the untrustworthy destroyers of His planet.”

May writes well. A strong editor could have made the collection of brief chapters more readable by cutting repetitious thoughts and organizing those chapters logically during the first quarter of the book. During that first quarter, May jumps from Germany to Canada to the United States to Vietnam and back to Germany. When the chapters begin to focus exclusively on May’s combat during the Vietnam War, the flow improves greatly and readers curious about an individual’s combat anecdotes will be carried along.