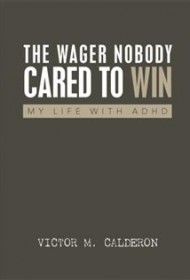 Victor M. Calderon’s memoir, The Wager Nobody Cared to Win: My Life with ADHD, has occasional moments of relevance, but is largely over-shadowed by extraneous detail and inconsistencies.

Calderon recounts disjointed episodes from his childhood in Aguadilla, Puerto Rico, his experiences in the U.S. Army, and his tenure as an agent for the U.S. Customs Service. On the surface, this is distinctive subject matter, but the writing style obscures any potential allure.

One problem is Calderon’s inclination to name everyone he’s ever known — or so it seems. While he goes overboard with such detail, he shortchanges readers by not elaborating other points. For example, he offers no mention of how, or when, he met his wife. In one chapter he is a young Army officer bachelor, and in the next he is making plans with his wife to retire from a 20-year-military-career.

Initially, the book is chronological. Then, it jumps ahead or bounces backward. Most of it is written in first person; however, Calderon sporadically turns to third person.
Grammatical and punctuation errors abound (“This school was one of the most interesting that I attended, including the many schools, [sic] I attended during my twenty years in the army.”) He often demonstrates incorrect word choice, as well (“It was worthy [sic] to climb those hills…).

The explanation for the “wager” reference in the title surfaces near the end and relates only to two people making a bet. There is no connection with it to anything else Calderon shares. Further, the subtitle falsely suggests the book will show what it’s like living with ADHD. This is given scant consideration. In fact, the author appears relieved of this problem thanks to an attentive school friend’s well-timed pinches to help him stay focused. Readers might appreciate being pinched, too, as it can be difficult to remain engaged with Calderon’s challenging prose.