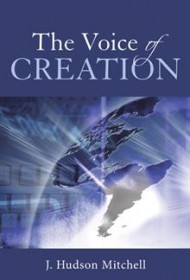 Through reflections on the Bible that illustrate a devotion to Christianity and a keen interest in science, J. Hudson Mitchell seeks to persuade non-believers that the Bible can be interpreted literally, and that God exists.

Acknowledging scientific inventions and discoveries, including how the Hubble telescope has provided remarkable images from space, Mitchell suggests science does not explain the importance of the discoveries. That context, she says, is only provided through an understanding of God’s plan for the universe.

Yet, her focus is mostly on how the lack of scientific information provides evidence of God. For example, the inability to precisely date fossils explains how the world was literally created in six days, she says, as no scientific evidence can absolutely dispute it.

Believing God exists because the Bible is accurate, Mitchell’s perspective leaves no room for other viewpoints: “To those who do not believe in God, everything in the Bible is questionable from the beginning to the end. One has to either believe the Bible or make God a big liar.”

It’s unlikely this premise will sway the intended audience of non-believers, but Christians who need no convincing are apt to find the assertions compelling. Yet, little of the content will be new to them because a large portion of each chapter recounts familiar biblical events.

Further, themes are hard to follow throughout as information is presented randomly.  A chapter discussing whether the world was literally created in six days abruptly jumps to a paragraph about how God is referred to as “I AM.”  The shift is confusing without subheads to explain a connection between the two points, however, subheads included in later chapters are vague and also do not provide needed context, labeling sections generally, as “Jesus of Nazareth” or “The Apostle Paul.”

While the argument intended to convert non-believers falls short, the familiar content and the thoughtful reflections could inspire already ardent believers to continue to study the Bible.