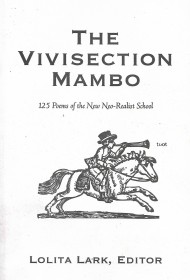 The Vivisection Mambo is an intellectually and aesthetically pleasing anthology that presents 125 poems by living and deceased American and international poets. It offers a rich, varied, and satisfying smorgasbord of 20th and 21st century Neo-Realist poetry.

Neo-Realist poetry marked a return to more accessible, unadorned poetry of the Realist tradition, embracing the concerns of ordinary people and everyday life. As editor Lolita Lark amusingly notes, these poets were a group of “odd fractious and often merry band of mavericks,” and they are well-represented here.

The anthology includes poems by outstanding canonical members of the Neo-Realist tradition, including Joseph Brodsky, May Swenson, E.E. Cummings, Federico Garcia Lorca, Jane Kenyon, Allen Ginsberg, and Langston Hughes.  Celan’s “Death Fugue,” as translated by Michael Hamburger, may be the most famous and historically significant among them. Also present are strong poems by widely published contemporary poets — including Kate Gale, Dean Young, Quan Berry, Virgil Suarez, Daisy Fried, David Wojahn and David Kirby —and equally compelling poems by lesser-known and emerging poets, including Carolyn Creedon and Andrea Cohen. The poems were previously published by The Review of Arts, Literature, Philosophy, and the Humanities, which Lark edits.

Few poetic compendia include such a thorough and well-integrated range of writers, and few American anthologies allocate notable space to non-American poets. The Vivisection Mambo is exemplary in this regard.  Additionally, the collection includes many women poets and some notable poets of color — groups often entirely neglected by anthologists.

An  “About the Author” section providing biographical information about contributors would be helpful, as would moving the Table of Contents from the back to the front of the book. Further, organizing the work into distinctive sections — perhaps by date of original publication or thematic content — would streamline reading.

But these are quibbles. This is a quality collection that is highly teachable in colleges, universities and centers for the literary arts and will hold broad appeal for serious readers of poetry.