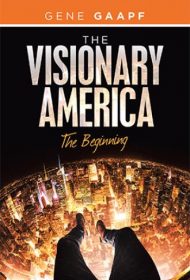 In The Visionary America: The Beginning, author Gene Gaapf delivers a sweeping depiction of a holy war over the soul of America.

With little explanation, God dispatches the angel Gabriel to anoint a nameless first-person narrator for a holy mission. After producing a film exposing America’s perceived transgressions — “graft of the government, rampant crimes, people turning to psychics, all manner of idolatrous [sic], children committing heinous crimes, and rampant homosexual behavior!”— the narrator bears witness to the destruction of California by this angry, uncompromising deity.

During one of the nameless narrator’s endless homilies, God himself speaks, naming the narrator “Mediko” and declaring him an instrument of the Lord’s power. Mediko then commands U.S. President Tom Landstrom to enact terrible atrocities in the name of the version of Christianity being plied here. Mediko’s adversary appears as Yehns-Con-U-Barjh of the country “Bad-Libyra.” Yehns is a powerful leader working to rebuild the Roman Empire with the help of a demon named Harmachucknuck.

God’s agenda is as extremist as it sounds. President Landstrom expels the United Nations, outlaws the American Civil Liberties Union, locks Congress in at gunpoint until they bend to his will, and seals the country’s borders by bombing everything and anyone in the path of destruction, as he works toward war with hell itself.

This isn’t an easy read. The point of view skips erratically, making it difficult to identify the pivotal character in any given passage. Grammatical and typographical errors abound (“seeing that our nation’s leaders have grown so wrapped in lies, I fear that when they see the mighty hand of god yet, will they remain therein”), and the book’s self-righteous dialogue becomes exhausting. Considering the homophobic, xenophobic and racist dogma espoused by the story’s protagonists, there’s much extreme malice on display.

Readers who revel in the apocalypse as retribution might find perverse appeal here. Most, however, will see little appeal in this hate-fueled fantasy.