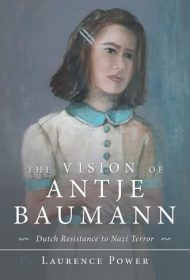 In Laurence Power’s historical novel, a Dutch family confronts the best and worst of humanity during the German occupation of the Netherlands in World War II.

In 1940, the Nazis are advancing toward the city of Arnhem in the eastern Netherlands. At first the occupation doesn’t affect the residents. The Baumann family—Wim and Corrie, and their children Cornelis (“Nelis”), 11, Antje, 9, and Gerrit, 6—are preoccupied with Antje’s first communion and her failing eyesight. By 1941, however, the Nazis are no longer benign, snatching Dutch men off the street to work in Germany, searching homes at will.

Wim and Corrie and even Nelis, the book’s narrator, take part in the resistance. But by 1944, when Wim suddenly disappears and the Germans win a significant battle in Arnhem, all the residents are forced to leave the city and find shelter – and food – during a brutally cold winter, the so-called “hunger winter.” At a time when even edible flower bulbs are hard to come by, the teenage Nelis learns the true meaning of hardship.

The author writes in a straightforward style, offering a historically accurate portrayal of the German occupation near Arnhem, a cautionary tale of how people respond at times of great crisis. Despite the bravery of many of the Dutch; others were rapacious in their selfishness. Notes Nelis, “‘One by one’ was an expression we hunger-trippers had coined for farmers so greedy that they sold items on a one-by-one basis only. …It was carrot by carrot, potato by potato. We had nothing to barter; every pocket was empty.”

Antje’s relative importance to the book is somewhat underwritten compared to the whole, and there are a few too many copyediting errors to ignore. However, Power has delivered an interesting novel—one that would be well-suited to young adults or history lovers who enjoy an easy-to-read book that explores another grim chapter in the history of war.