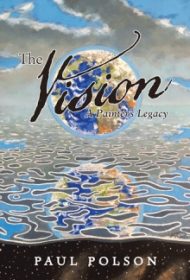 Paul Polson has lived a life many artists only dream of, spending more than 60 years following his dream of being a studio artist, painting and sculpting. He recounts his determined and interesting journey in The Vision.

Polson’s work has been displayed in galleries and other venues around the West Coast, and he’s a frequent lecturer at the University of Washington and other arts-related institutions.

Here, he tells of two childhood memories: one of lying on the hood of the family car on a cold winter night, mesmerized by countless stars, and the other of sitting alone at the mouth of a cave, watching a quiet snowfall. “The stars made me look out into the wonders of the physical universe, and the cave made me look at the universe inside myself. They both were endless and filled with infinite possibilities… I have always tried to pursue those feelings of wonder and express them.”

Following that path, adjustments were necessary. The author took jobs in art-related businesses, for example, that allowed him time to create in his studio. Eventually, that evolved into his own business, Big Air Productions, which made large inflatable figures for clients such as Radio City Music Hall, Sony and Cirque du Soliel. Twice married and the father of four, he also juggled family duties—not always successfully—as well as traveled the world. “I realized that part of being an artist was experiencing life around me and taking in information,” he writes.

Though not a professional writer, Polson does a solid job here. His narrative flows smoothly, in a straightforward and intelligent manner. Even potentially mundane material, such as his penchant for forming softball teams wherever he worked, can provoke a smile. The book stands not only as a memoir but as a first-hand look at an artist and the arts community. Any reader can take away something from Polson’s adventures.

The most valuable lesson is the most obvious: Follow that dream.