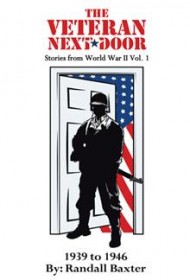 The number of surviving World War II veterans has slowed to a trickle, but those who remain recall vivid memories of their time defending the country. Their words and emotions are shared in this touching and informative nonfiction book, drawn from numerous interviews on a radio show of the same name.

Author Randall Baxter wrote, produced and hosted the nationally broadcast program that premiered in 2010 on WNOX Radio in Knoxville, Tenn. His aim was primarily to share the soldiers’ personal experiences. But at the book’s start, he also interviews a now-grown child who was hidden away at age two, just before her entire family was sent off to Auschwitz.

The stories are ordered chronologically from 1939 through 1946, each opening with brief details from the specific battles and war situations highlighted. The men participated in actions that ranged from the invasions of Sicily and Okinawa to Pacific Ocean battles, and one was a German prisoner of war. The role of black soldiers in the armed services also is chronicled.

This well-designed book works because Baxter effectively details the events of the time periods in a way that enhances the soldiers’ words without interfering with the personal context. He also includes their love stories and highlights their life accomplishments after the war. At each chapter’s end, he ties up the commentary with an effectively written recap. A scattering of pertinent black and white drawings and photos is a plus.

One minor flaw of the book, written to recreate the radio format of give-and-take conversations, is that the host occasionally recaps what was said previously as if supplying a reminder following a commercial break. Simply editing out those extra snippets would improve the book’s flow.

Overall, this is a moving, enriching and unique approach to preserving WWII memories and should appeal to a wide audience.