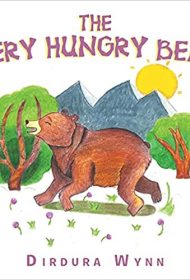 A bear who lacks self-control helps herself to the food of other animals in Dirdura Wynn’s children’s picture book The Very Hungry Bear.

A bear wakes up hungry and sets off to find food. On her way to the stream, she sees a basketful of berries, lettuce, and carrots, and can’t resist eating the contents. When she’s done, the basket’s owner, a rabbit, returns and yells at her. Bear apologizes, promising to replace the food, but instead discovers another basket and repeats her behavior, this time victimizing a fox.

As Bear continues along, she meets birds tweeting, “Stop and think before you eat.” They point out the unfairness of her actions and urge her to replace the food before going to the stream to look for fish. Bear collects food for the rabbit and fox, then eats just enough fish at the stream, leaving some for the other bears, too.

The story is written in a pleasant, simple style that uses repetition effectively, but it suffers from inconsistencies and technical errors. One sentence reads, “The birds urged bear to replace the food before, [sic] enjoying herself at the stream full of fish.” Sometimes “bear” is capitalized, other times not, although it seems to be used as the character’s name. Another section appears to describe Bear leaving the rabbit’s basket behind, only to reveal two lines later that she hadn’t reached the basket yet.

The artwork is hand-drawn and somewhat rough, with some visual elements used multiple times. Even when situated against different backgrounds, this detracts from the presentation.

The book’s lessons of moderation and consideration are nicely delivered, but Bear’s decision to finally replace the food seems as much externally driven, by the birds, as from her own reflection and empathy. Happily, the final scene indicates that Bear has learned to be more thoughtful before eating.

In sum, while the message is worthy, the book requires polishing before it’s likely to attract a wide audience.