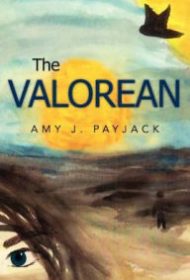 A dimension-hopping adventure set in a multiverse where Earth is just one of an abundance of realms —a mere piece of paper in a stack of papers—Amy J. Payjack’s ambitious novel about a young woman from Earth who embarks on a journey of self-discovery blends high fantasy with elements of mystery and romance.

Kanna lives a mundane existence with her mother in a city called Airdrie (presumably in the Calgary Region of Canada). But her life changes when a mysterious, tattooed man named Nixodious “Nix” Clarentiene appears at her door with an outlandish story. Nix is from another world and has been tasked by his empress to guard Kanna, who is evidently part of a prophecy in which the future of an entire world could hinge on her survival.

When Nix brings her back to Valore, she is not only enthralled with the beauty and wonder of the new world but also more than a little stunned by her attraction to Nix. As her love for her guardian grows, they’re brought even closer through various adventures—until a former love interest reappears in Nix’s life and Kanna is forced to reevaluate her decision to leave Earth for the fantastical realm.

Although this novel is powered by a fluid writing style and a strong narrative voice, the storyline is decidedly loose, with many nebulous and confusing elements and plot points, for example: the prophecy surrounding the Lost Child; the various settings, which are barely described; Nix’s backstory; the circumstances surrounding the war in Valore; etc. The lack of narrative focus, or clarity, is a major flaw, as is the inundation of grammatical errors. Some miscues are inadvertently entertaining, completely changing the meaning of the sentence. (“Kanna reached forward and placed a hand over her mothers.”)

While the book offers an intriguing and potentially entertaining premise, such errors and omissions undermine reader enjoyment. Revision would give the story wider appeal overall.