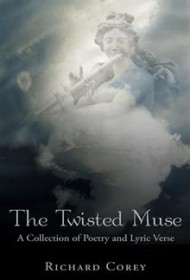 The poems and song lyrics included in The Twisted Muse seek to document the emotional life and personal struggles of their speaker, who, according to the back cover, suffers from a bipolar disorder. They were written over a span of 25 years and are intended to document “the evolution of [Richard Corey’s] life.”

The book is divided into a poetry and a “lyric verse” section. The only notable difference between the two is the use of the “VERSE,” “CHORUS,” “BRIDGE,” and “LOOP” designations in the verse section.

Corey’s poetry and lyrics are clearly rooted in strong personal emotion. The author is to be commended for summoning the courage to face those feelings. Unfortunately, the pieces don’t often convey the power of those emotions as powerfully as they should. Much of the problem is that the work relies predominantly on simple rhyme schemes and cliched phrases.  For instance, in “My Amazing Grace,” the speaker writes of his journey to faith in well-worn terms:  “I looked in churches./ I looked in steeples./ I looked in books./ I looked in people.”  Other examples of overused imagery include: “My heart is [sic] lump of coal/ in a diamond mine”;  “We broke free from those chains that bound us./ We tore down that great big wall…”;  and “Rain or shine,/ a stormy sky./ I won’t let your memories die.”

The non-rhyming poems lack prosody and read much more like prose; for instance: “Do you ever have bad dreams?/ It seems all I ever have are bad dreams. / Perhaps, I should talk to someone/ To get them out.”  And without musical notations to accompany the song lyrics, the effectiveness of those pieces is muted.

In sum, the collection suffers, overall, from its lack of vivid imagery or inventive use of language. While those facing similar struggles in their lives might relate to the pieces here, they ultimately lack the resonance and widespread appeal of more accomplished work.