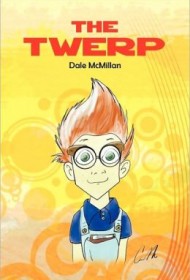 The hero of East Texas retiree McMillan’s inspirational coming-of-age novel is a scrawny, bespectacled misfit named Fredrick Overall. “Frail Freddy” is certainly no candidate for the high school football team coached by his blustering father, Luther, and he gets no respect from his older siblings–not even his sister, Velma. Only the Twerp’s loving mother, a retired first-grade teacher, sees potential in the boy, based on his much-vaunted insight.

“Humans are one of the most interesting critters on earth,” he observes. “There is never a dull moment when you are studying humans.”

Against the odds, geeky Fredrick eventually prevails in his fictional town of Pressley, Texas. He becomes a computer whiz, makes a small fortune in the poultry business (which is described in great detail) and handles his stock portfolio with aplomb. Meanwhile, the Twerp defies local mores by marrying his childhood sweetheart, a mixed-race girl named Eva, takes on corrupt town officials and outwits vicious gossips. In the end, he’s all grown up and esteemed by everyone.

There are many faults here. The hero’s characteristic gesture–-“Fredrick pushed his glasses back against his face”–recurs endless times in the text (there are four such repetitions in just 42 lines on pages160-161), and McMillan’s flat prose is peppered with grammatical and spelling inconsistencies. In addition, his well-meaning observations on race often condescend. For instance, Eva sometimes “reverts” (to use the author’s word) to black dialect when she’s excited, which the author and his hero both find amusing.

Still, adults and younger readers might be moved by McMillan’s pleas for good schools, faith in God, social tolerance and sweet-potato pie, as well as his sustained shout-out to the kind of Texas boy who is more suited to writing computer programs and raising first-rate broiler chickens than trampling linebackers on his way to the end zone.