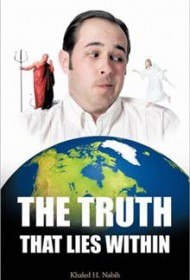 In The Truth That Lies Within, author Khaled H. Nabih promises that this compilation of his thoughts will provide readers with a “spiritual jolt.” But while some might find his words powerful enough to recharge their inner batteries, others are more likely to feel puzzled by his swirling thoughts, rendered in unfocused prose.

The book is loosely based on the idea that greed is the root of all evil. It offers short, simply titled chapters such as “Love,” “Family,” and “Serenity.” However, although the format indicates an accessible read, the message is often muddled.

For example, in the chapter titled “Life,” Nabih begins by contemplating whether we are the only humans in the universe. “Is it just Earth or does this universe have several other planets suitable for human beings?” he writes.

Quickly, though, the focus shifts. “Is life based only on religion?” he writes. “Should we ignore knowledge, learning, discoveries and exploration? In other words, the fun. Or should we focus on being the most powerful while destroying others that share this planet with us?” The chapter then touches on religion, death, how to establish personal goals, and more. By the end, it’s impossible to determine Nabih’s ultimate point.

There are worthy thoughts here, to be sure. Near a seashore in Cairo, for example, Nabih learns a valuable lesson after an encounter with a poor man: “I realized that when we never look, we go blind; we tend to take more than we need, want more than we have, and automatically live hungry for more; thus we are never happy.” Quotes from Mother Teresa, Albert Einstein, and others offer further introspection.

Unfortunately, such insights too often get lost in the author’s stream-of-consciousness writing style. There may be much truth that lies within these pages, but finding it requires an effort that is likely to overwhelm even the most dedicated readers.