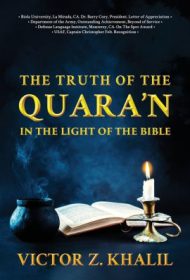 Comparisons among the Abrahamic faiths have been ongoing since the inception of Christianity. Some publications try to foster understanding, others to promote a specific viewpoint or to vilify the “other.” This book states its objective as seeking truth but, in fact, seems to promote a Christian viewpoint while debunking the Islamic one.

Chapters start with Bible verses; some also contain verses from the Quran. These are followed by interpretative remarks. Discussions include the concept of God, Jesus, and the Holy Spirit; the Cross; the Bible; and specific topics, such as forgiveness and paradise.

Throughout, the author’s arguments indicate an inherent bias toward the Bible. For example, in its chapter on the Bible, Khalil ignores the scripture’s internal inconsistencies (such as recognized inconsistencies in the Christmas stories between the Gospels of Matthew and Luke) and any inconsistencies when reading the Bible as a literal text. This latitude is not afforded the author’s evaluation of the Quran. While he evaluates the Bible interpretatively, he reads the words of the Quran literally.

In the two chapters devoted to the Cross, the author quotes extensively from the Bible, but scarcely from the Quran. Further, he states that the Quran denies the crucifixion, noting: “It seems absurd that somebody who came several hundred years after the event should attempt to deny the facts of the crucifixion when he was not present to witness its occurrence.” To demand an eyewitness account raises an unreasonably high bar for proof, and does not acknowledge that the Quran is considered scripture to Muslims, and, hence, doesn’t need further evidence; its words are sufficient.

There are many other examples of shallow or inadequate interpretations of both the Bible and Quran. Ultimately, objective readers will likely conclude that this work doesn’t seek to explore truth but, rather, to profess a predetermined message.

Readers looking for a serious, scholarly comparison of the Bible and the Quran will do best to look elsewhere.