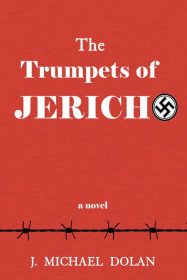 The Trumpets of Jericho is a powerful and inspiring story of the 1944 prisoner uprising against the Nazis at the Auschwitz-Birkenau death camp. This historical novel, the product of painstaking research, is more than an account of how hundreds of prisoners refused to meekly march to their deaths in the camp’s gas chambers. It is a story of heroes whose ultimate sacrifice lives on as a reminder and opprobrium of the worst horrors of the Holocaust.

Those revolting were members of the Sonderkommando—prisoners who no longer could stomach being forced to cajole new arrivals into the gas chamber and then clear out the bodies for burning in the crematoria. Prison women working in the camp’s munitions factory courageously snuck out in their clothing tiny amounts of gunpowder the rebels used to make grenades to blow up the crematoria and punch holes in the camp’s electrified fences. The women, led by a Polish Jew, Roza Robota—now recognized as one of the heroes of the Jewish resistance—would have been subjected to immediate execution if caught.

Dolan skillfully describes the months and months of difficult and sometimes seemingly hopeless preparation. Readers board the same emotional roller coaster of anger, steely resolve, crushing disappointment, self-doubts, guilt and hatred that the plotters rode. He deftly uses narrative, dialogue and the camp’s horrific details to speed the reader to the uprising and its aftermath.

The Trumpets of Jericho is at once an immersion in human depravity and a triumph of the human spirit. It is strongly recommended for readers who are trying to understand how mankind could sink so low yet fight so determinedly against evil in its most archetypal form. Readers who appreciated Martha Hall Kelly’s bestselling historical novel Lilac Girls, will find Trumpets to be a worthy companion.