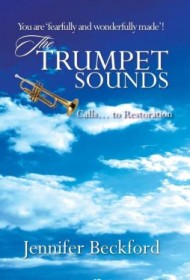 Sometimes a dose of inspiration can change the course of your day for the better. The Trumpet Sounds is a collection of inspirational anecdotes, quotes and suggestions with a Christian point of view.

Author Jennifer Beckford writes directly to readers as if in conversation (“Do you feel neglected, friend?”), suggesting they participate in volunteer work, value women’s contributions in the home and the world at large, and focus on God rather than other people for what they need. She makes it emphatically clear in a chapter on marriage that same-sex couples are unwelcome in her faith, but otherwise tries to keep the tone positive.

Beckford’s writing is generally clear and to the point, but a story about a woman whose sister gets engaged to an unworthy man becomes confusing when quotation marks aren’t used consistently; it’s extremely difficult to tell who’s talking, and about whom. A short parable (a man on the verge of suicide sees someone in worse shape and reconsiders) is also puzzling as retold here, and Beckford’s comment (“I don’t know whether this story is true, but I like the moral”) only adds to the confusion.

The author’s choice to include stories about the process of writing in such a slim book may hint at a shortage of material overall, and calling out friends and family who didn’t jump to return text messages asking for proofreaders in a piece about how God provides feels rather backhanded. Beckford nonetheless encourages readers to do for their communities and families in an effort to spread positive actions.

The Trumpet Sounds is unusual, and would benefit from better organization, but fans of inspirational nonfiction may find advice here worth taking to heart.