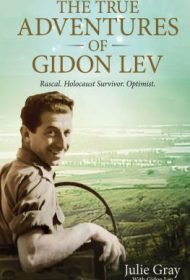 Fleeing to Prague after Hitler annexes Sudetenland in 1938, Gidon, age 6, and his mother spend four years in Térézin, a concentration camp north of the city. Of over 15,000 incarcerated children, he is one of only 92 known to have survived the camp; he and his mother are the only surviving family members.

After liberation, they move to Brooklyn and Toronto, where his mother remarries. The “sad and lonely” Gidon joins a Zionist youth group. Soon “thoroughly indoctrinated,” he moves to Israel in 1959 and embraces kibbutz life as an agriculturalist, soldier, and family man.

Gray, a young journalist and converted Jew who moves to Israel to heal from grief and loss, is initially reluctant to take on what she imagines will be a “distressing” project, but she becomes fascinated with Gidon’s coping mechanisms and optimism, determined to dig below the surface of the man who himself had recently lost his wife of 40 years. She discovers that beneath this “persona of cheerful haplessness” is a shrewd, hardworking individual with “carefully curated truths.” To their surprise, they become committed “Loving Life Buddies.”

Gray writes in first-person, telling the story of their evolving relationship, the making of the book, and Gidon’s life. Also wrapped around Gidon’s journal excerpts, interviews, and biography is a well-researched but overly text-bookish history of the Holocaust and Israel. Gidon’s personal story is often eclipsed by this type of contextual detail, which slows the narrative. Nonetheless, Gray and Gidon are likeable and engaging, and Gray writes in a conversational yet intelligent tone that draws readers into the story.

The True Adventures of Gidon Lev can be pedantic at times. Still, readers will find Gidon’s story an inviting, eye-opening look at an important chapter in Jewish history.