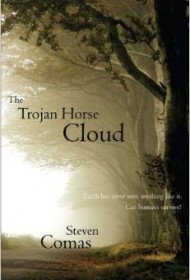 This science fiction novel begins with a fascinating premise: What if an Earth-sized gas cloud rapidly heading toward us had worldwide officials planning for the possible destruction of humanity? The book’s title lets readers know in advance that there’s something sinister associated with this strange fog.

Although scientists and politicians appear throughout the story, the effects of the deadly gas cloud are personalized through Justin Collins, his pregnant wife, Jenny, and their two children, Sarah and Jake. As the cloud covers the planet, men, women, and children unknowingly inhale a toxic new element that attaches itself to lungs and kills hosts in one year’s time.

The story follows various leaders as they struggle to find a cure in time and establish robot-run hospitals for unaffected babies, who represent mankind’s only future. Sections within each chapter focus on various characters, each headed by the characters’ location and the date and time — a format that builds suspense as the days gets closer to the one-year mark.

The intriguing idea and well-plotted story unfortunately suffer from abundant and irrelevant details, including extensive descriptions of hair, clothing, food, and urination. (“Justin then grabs his [specimen] bottle, places the lid on the toilet tank, unzips his pants, and tries to think of water, waterfalls, gushing rivers, whitewater rafting, and waves crashing on the beach, and then the pee begins to flow. Before it reaches the top, he switches over to the toilet bowl… “)

Additional problems include missing words (“Then I am going to take you the hospital”), wrong words (“there habits of eating”), and awkward sentence construction (“If you get anymore [sic] ideas, send them to me and the group and we will decide on if they are good ideas”).

With revision, The Trojan Horse Cloud could appeal to sci-fi fans with its wide-ranging look at how humanity might react to a global crisis. As it stands, however, the story is unlikely to attract a wide audience.