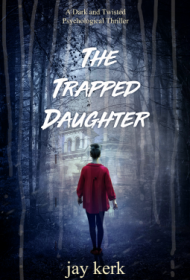 In Jay Kerk’s The Trapped Daughter, protagonist Belle Andresson believes herself held captive by her father, Richard, and his secretary/lover, Marie.

The story is told from the viewpoint of Belle, who lives in the family’s fenced, gated, and guarded property, and believes that her father, Richard, and Marie are drugging her to keep her compliant. Much of the narrative centers around her obsession with Gabe, a visual/performance artist whom she loves. Convinced Gabe has stolen her work and achieved fame by claiming it for his own, she alternately agonizes over wanting him back and plans to escape her prison and get revenge.

There are early signs that Belle is an unreliable narrator and may, in fact, be mentally ill. She has taken medication all her life. She hides notes in her room for the police to find if something happens to her. She throws notes over the fence asking strangers to call the police. When a friend visits, Belle convinces herself the friend is conspiring against her. The reason behind Belle’s worsened mental health is never explained, nor is the role her mother’s death years earlier may have played in it.

Because readers are essentially captive inside Belle’s head, we see only her rage, obsession and delusion. This quickly becomes oppressive and impedes the story’s momentum. There’s only one episode of true poignancy: when Belle finally, if vaguely, senses the depth of her illness.

The narrative viewpoint also means readers learn little about other characters, including the doctor Belle hates for unknown reasons, Gabe, and even Richard, whose characterization seems inconsistent: for example, he expresses concern for Belle but often leaves her alone even though she’s unstable.

The book comes to a sudden and unrealistic halt with the last chapter, in which everyone is almost maniacally happy.