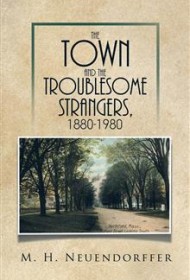 Human beings are always affected by their environment, and for authors as diverse as William Faulkner, Sinclair Lewis, Sherwood Anderson and Harper Lee, the environment becomes a major character in their work. New Englander M.H. Neuendorffer attempts this approach in her debut novel about the small New England town of Northfield, Massachusetts.

The author’s story is told over the course of 100 years, from 1880-1980, and, according to a Preface, revolves around “the recurring interaction between the permanent townspeople, and the different and often troublesome groups” who sometimes passed through or settled. This “us versus them” tone persists through the book.

The story begins in the late 19th century, as James, a taciturn farmer, becomes even more silent and solitary after his wife dies in childbirth during a blizzard. His silence breeds distrust from the townspeople. That type of suspicion later expands to Otto Kirschheimer, a German newcomer who hires foreign workers for the railroad. Summer people who flock to the area for the beautiful scenery at this time also arouse mistrust, and the suspicion increases during the World War I years, especially against those of German ancestry. The Vietnam War, its accompanying protesters and the hippies who settled in the Northfield area also exacerbate the gap between the old timers and newcomers.

Neuendorffer provides vignettes of characters over the years, but there is little continuity; characters simply disappear from the story, and the town itself never assumes any identity.  The author often loses focus, as when she spends pages in detailed descriptions of a youth bike tour of Germany in the 1930’s.

Although the author writes with lively engaging dialogue, the book is overly ambitious and unfocused. Spread too thin, the narrative fails at both solid character development and at giving the town a compelling personage. As a result, readers will find it hard to engage with this story.