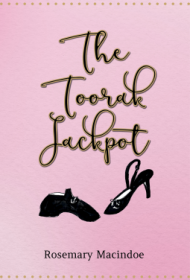 In The Toorak Jackpot, debut author Rosemary Macindoe concocts a breezy send-up of chasing wealth Down Under.

Top shoe salesperson Bert Smith works hard and seems poised for continued success. When a letter arrives informing him that an anonymous benefactor wishes to give him a house in the affluent Melbourne suburb of Toorak, plus capital to invest in the stock market, he accepts the offer and quits. Rather than question his luck, he is “happy to live in ignorance like most of the Australian population.”

Bert begins living the high life and, according to a condition of the gift, introduces himself as royalty to his amused neighbors. Rejecting the advice of his broker, he invests in Bogus Minerals. When Bogus goes bust, Bert becomes broke. En route from prince to pauper, Bert decides to find work and live within his means. Upon giving 20 cents to a grateful street musician, he discovers an important life lesson.

Despite detractions such as occasional ethnic stereotyping and a few awkward shifts in voice, such as when Macindoe injects herself into an otherwise omniscient narrative: “There’s just one chapter left to write: the day Bert’s mystery sponsor was revealed…,” Macindoe succeeds in creating a lively comedy. Short, action-packed chapters populated with quirky characters propel the story forward. Aussies may further glean political innuendoes from references to Bert’s goldfish that are named after prime ministers. While these remarks may be lost on outsiders despite the inclusion of biographical notes, anyone can understand Bert’s sentiment: “Thank God I’m not in politics, I might end up feeling like I’m swimming in a fish tank not really going anywhere!”

A swift read, The Toorak Jackpot humorously looks at what it means to be truly fortunate. Echoing the good deed of her character, Macindoe states that 20 cents (AUD) from the sale of each book will be donated to the Clown Doctors, the Humour Foundation, an Australian charity.
Also available as an ebook.