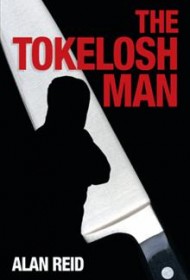 The Tokelosh Man centers on Spencer, a schoolteacher, and a cast of friends and foes who color his life from boyhood on. The novel, grim and violent, though sometimes leavened with dark humor and hope, tells of Spencer’s struggles with the deterioration of adolescent culture as he ekes out an existence working with troubled teens.

The story begins with Spencer losing his job and with his foreboding sense that “It is the advent of the Tokelosh man, a small devilish mischievous man in Zulu folklore, in his many guises which is to change my life forever.” An ensuing encounter with a knife-wielding student leads him to recall his own days as a student and introduces the characters in the story. The plot pits Spencer and several friends against a gang of violent drug-users, including brothers Xanthye, Bekker and Skeleton, who will stop at nothing to avenge perceived wrongs and win the prize: Vicki, a beautiful woman who has repeatedly thwarted their advances.

At times, the chronology of The Tokelosh Man is confusing and though fully developed, the story is poorly edited. It is often fast moving, with endless violence. In an early scene, for example, Spencer attempts to avenge an attack on his friend, Ollie, who is dating Vicki: “Spencer switched off the engine. As he was about to push open the door, Skeleton hit him through the open window. He fell back over the gear stick dazed by the blow, he felt blood trickle from his split lip. …

“With that he (Skeleton) tossed some salad onto Spencer’s face, before sitting astride his 500cc Matchless G50 and firing it into life with a powerful kick. …”

The violence is often repetitive, and it defies reason that so many assaults, rapes, and even an attempted murder could go unpunished by the law. The Tokelosh Man is at times a captivating read, but a sharper edit could have improved it greatly.