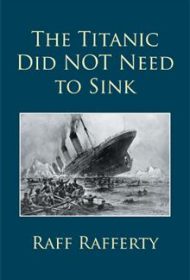 The “unsinkable” Titanic struck an iceberg in the North Atlantic on April 14, 1912, and went down with a loss of more than 1,500 lives. Through the years, the disaster has spawned endless analysis and theories. Here, author Raff Rafferty presents his intriguing thoughts on how the outcome might have been changed.

Rafferty, an electrical engineer for more than 30 years, worked on secret U.S. space and defense projects throughout his career. Over the years, he formulated the ideas on which the book is based. The author devotes the narrative’s first half to the facts of the case, which will be familiar to many, although he manages to keep it interesting. With the facts laid out, he then presents his ideas on how disaster could have been averted.

Rafferty notes that three factors influenced the sinking: inflow pressure (the physical pressure of the water entering the ship); head of water (the depth of the hole below the water’s surface); and the size of the hole. He posits that there were numerous actions Titanic Capt. Edward Smith could have taken to save the ship. Reversing the engines, for example, would have lifted the ship’s nose and reduced the inflow pressure; plugging every hole in the ship with mattresses and tarps would have reduced the water taken on. Emptying the ship’s swimming pool would have lightened the load. Ordering crew members back below deck to get all available boilers working could have increased the ship’s speed, and so on.

These are intriguing notions, and Rafferty bolsters his argument with the story of the Arizona, a passenger ship that struck an iceberg in 1879. The captain put the ship in reverse to reduce pressure on the damaged hull, and was able to make it back to port.

Clear, concise and interesting, the book gives hard-core Titanic buffs something to ponder, and even those with a casual interest in the Titanic should find this short volume to their liking.