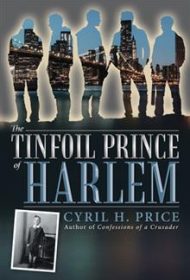 The Tinfoil Prince of Harlem is a compelling look at growing up in Depression-era Harlem and Brooklyn and how those experiences shaped author Cyril H. Price, a retired dentist, professor, college dean and author.

Price was born in 1931 in New York to parents originally from Trinidad. The family moved to Ethiopia, where his father helped establish education programs. When the elder Price’s health began to fail, the family returned to Trinidad, and after his father died at 43, two-year-old Price, his mother and older sister moved to Harlem.

This is where Price’s story really begins. His detailed recollections are fascinating. He writes of taking a timeout during a street stickball game to watch the Hindenburg slowly float overhead; of living in “a pitiful cockroach-infested one-room dump”  (and being horrified to learn that the bugs flew); of wandering the streets, dodging gangs and thugs; of escaping to the movies, hearing Rev. Adam Clayton Powell Jr. preach and more.

The title also comes from those streets, where he would scavenge empty cigarette packs. “My hobby was collecting the tinfoil in the pack, rolling it into a small ball, and adding layer after layer until I made a huge, baseball-sized, and very heavy monster. When they got too big to lug around I’d put them into a box at home and search for more.“

These are entertaining stories, to be sure. But they also skillfully illustrate how Price’s childhood shaped him. Once the victim of a racial attack by a white boy in a park, he was rescued by another white man, teaching him that you can’t judge a person by his color. And his overworked mother’s distance—she never marked his birthdays, asked about his school work or consoled him when he needed it—prodded him to go it alone to improve his life. After high school, he got himself into Howard University without even telling his family and launched himself on the path to success.

Through clear and informative writing, Price provides a wonderful look at Harlem during an important time of U.S. history, told through the eyes of a child. The Tinfoil Prince is an excellent read.