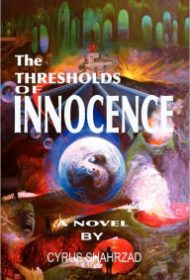 This anguished autobiographical novel by an Iranian-American businessman, husband and father spans four-plus decades of strife—from the author’s political-resistance days in the 1950s, when the Shah’s ruthless Savak agents tortured and killed dissidents on campus and in the streets of Tehran, to the 1990s’s, when Cyrus Shahrzad’s unnamed narrator grapples with the terminal illness of his beloved, Americanized son, a hulking college football star with his eye on the NFL.

Shahrzad brings anger, empathy and the sting of real life to the narrator’s relationship with the “love of his life,” the unnamed wife to whom he is both obsessively devoted and forever locked in “harsh and heated arguments” over religion, child-rearing and financial security as he tries to build a business in New Jersey. His account of a harrowing winter voyage aboard a German tramp steamer bound for the U.S. perfectly captures the desperation and fragile dreams of immigrants seeking better lives. His cries for “freedom and human dignity” can be eloquent, coming as they do from a committed activist who joined resistance groups to fight the old yoke of British colonialism, the Shah’s brutalities and the CIA’s dirty tricks. He faced scant armed combat, but constant peril.

Unfortunately, Shahrzad’s narrative is disorganized, and his English is poor. “I was not being happy with the learning of the literature,” he writes. Absent a sharp-eyed editor, “shack” becomes “shaq,” “terrible” is “treble,” and “dawned” is “darned.” Innocence contains countless memorable episodes—naked humiliation at U.S. Customs in New York, hiding from gunmen in a closet in Tehran, clinging to quack cancer cures as the doomed son nears his end—but they’re trapped in murky prose and random sidetracks.

A good screenwriter, in particular, might carve from all this a terrific movie about human reinvention in the face of tragedy, but his or her chisel would need to be keen. The material here is raw, but salted with emotional gems that offer much promise with revision.