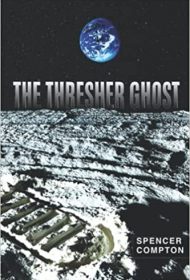 Spencer Compton’s The Thresher Ghost is a mashup of techno-horror and historical thriller that careens through the conspiracies and politics of the 1960s and features pill-pushing surgeon-to-the-stars Dr. Wiley McCoy.

Dr. McCoy makes a very comfortable living dispensing uppers and downers to a variety of celebrities, including Howard Hughes. But during a late-night operation on his girlfriend Katie, either too much to drink or the voodoo mutterings of his OR nurse during surgery causes his hand to shake. When Katie dies, it effectively ends McCoy’s career. Hughes uses this reality to blackmail McCoy into partnering with Romulo DaVinci, a Cuban obsessed with voodoo and the ability of the rare Sanjivani flower to bring the dead back to life.

Hughes sponsors Romulo not only because he seeks immortality, but because he wants Romulo and McCoy to bring John Kennedy back to life. But first, Romulo must engineer the theft of the Thresher nuclear-powered submarine, supposedly sunk in 1963, to clandestinely carry out his experiments with revivification.

Compton has included it all in this tale: Hughes’ mystery and notoriety, allegations that the Apollo moon landing was a hoax, Jimi Hendrix and Woodstock, the early start of the AIDs epidemic, the Charles Manson murders, Marilyn Monroe, Ted Kennedy and the disaster at Chappaquiddick.

It’s a chaotic, 200-page ride that makes little sense as characters and events from the headlines appear in strange contexts. For example, Charles Manson runs a secret California desert location for Hughes, where Hughes is filming a faked Apollo moon landing. Romulo’s sister, an extraneous character who pops in and out of the story, escapes from a private Saudi brothel, marries Jimi Hendrix on a plane as he goes to Woodstock, and dies almost immediately from AIDS.

Worse than such confounding events is that Compton offers a cop-out ending that nullifies the entire read.