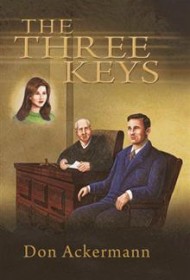 The Three Keys portrays one man’s fight to regain his footing in the face of several distressing events.

As this novel of self-discovery opens, Jim Schroeder is struggling to forgive his wife Leslie for having an almost year-long affair with her boss. Until her affair, Jim, a small-town farm boy, thought he had conquered life in the big city. A well-respected land surveyor, he feels blessed with his life. When Leslie’s affair affects Jim’s job and family in ways he couldn’t have foreseen, he has to re-think everything he thought he knew.

Morally bankrupt, he returns for a visit to the farm, where his mother reminds him of the advice of his German grandmother: “…there are three keys to successful living, honor, courage and perseverance. And of the three, in the end, it’s honor that makes the difference.”

Although the book has its shortcomings (notably the stilted dialogue displayed by Jim’s wife), Ackermann is a generally skilled writer and the story moves along smoothly. The author captures Jim well, reflecting the character’s frustration with his wife after she asks when he’s going to get over it four months after the fact. Says Jim, “…is there some sort of time limit for this kind of thing? You know like six months for the loss of your mom, one year for losing your son or daughter. Does one ever get over being seriously hurt?” The intrigue involved in his job as a land surveyor as he solves a nasty land dispute is also interesting, possibly because most people will know little about the profession.

In addition to the dialogue issue, the story is hampered by clichéd secondary characters (the oversexed neighbor, the menacing land owner). Still Ackermann does a competent job showing Jim’s desire to hang onto his moral center. His dilemma will resonate with anyone who has ever tried to be a stand-up guy or gal in a complicated world.