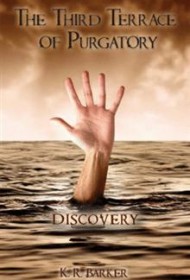 In K.R. Barker’s thrilling novel, Kirk Saunders is an ad man, a partner at an advertising agency in the 1950s. His firm is floundering, dependent on a single client whose marketing director, Max Lombard, has a grudge against him.

As Kirk fights to save his firm, Lombard seems perfectly content to use Kirk’s dirty laundry against him. After all, Kirk is no saint and has had multiple indiscretions, though he has a wife and two children at home. As Kirk and Lombard both struggle to keep their anger in check and work together, Kirk realizes that Lombard is not what he seems and decides to take action against him.

The Third Terrace of Purgatory is a well-written novel about the consequences of anger and making bad decisions in the moment. On the surface, Lombard appears to be a genial man, but readers quickly learn that darkness lurks under the surface. Kirk, by contrast, is difficult from the outset. He lets his temper get the best of him, cheats on his wife without a second thought, and is all-around unpleasant. Although readers may dislike him initially, Kirk somehow worms his way into our hearts, and we certainly sympathize with him. As these two characters become locked in a battle, it becomes increasingly clear that things can only end with one destroying the other.

Though there are some minor editing mistakes and the twist at the end of the novel is difficult to believe, The Third Terrace of Purgatory is nonetheless an enjoyable, character-driven, psychological thriller. Barker’s writing is confident and self-assured, and the novel moves at a steady, enjoyable pace. The character development is one of the strongest points of the novel; Barker gets inside his characters’ heads, and readers see multiple layers and facets to each person in the novel. In sum, Barker has written a gripping story that readers will find difficult to tear themselves away from.