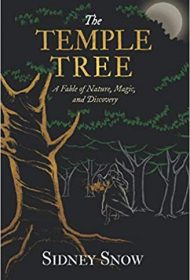 As with all good fables, Sidney Snow’s The Temple Tree urges readers to open their minds to nature and to listen to their hearts, as well as their minds.

The novel opens in a Brooklyn attic with young Ali drifting off toward sleep, his head filled with the magical stories his late father had told him, particularly his favorite: “The Temple Tree.” As Ali slips from consciousness, the voice of his father fills his head, and the story begins.

In the forest outside an unnamed village in an unnamed country, there stands a golden tree worshipped by those who see it as a gift from the gods. Buddavahni, a basket weaver whose magical and psychic powers are held in awe by the rest of the village, is particularly drawn to it, spending long hours beneath its canopy, engraving poems on clay tablets, silently communing with its spirit.

High in its branches hang three dissimilar fruits that also prompt wonder and worship. Then one of the fruits, the most mysterious one, darkens, appears sickly and finally falls to the ground. Why did this happen? What could it mean? The villagers speculate, and the tree itself worries, but to no avail. Their questions are answered, finally, near the story’s end.

Crowded with images, magic and mystery—as is common with this genre—the story skillfully teaches lessons about life and how it should be lived. As such, its characters are the vehicles to carry these lessons forward. Even so, the author still manages to provide his characters with foibles that stress their humanity: Buddavahni’s wife burns dinner, a villager is stubbornly convinced of his own wisdom. The result is a story with unexpected dimension and depth, one that engages and sometimes surprises.

In sum, readers who appreciate this genre will enjoy The Temple Tree.