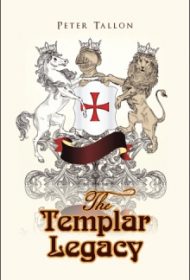 Peter Tallon’s The Templar Legacy continues the story of Sir Richard Calveley begun in his previous book, Lion and the Lily.

Writing a second volume in a trilogy poses challenges for readers and authors alike. Sufficient background information must be offered to fill in new readers without deterring returning ones. Here, this background is missing, and new readers are likely to feel lost initially.

Calveley doesn’t appear immediately. Instead, the book begins in 1422 with the death of English King Henry Plantagenet when England is warring with France. The king issues a deathbed instruction to his brother to re-instate the Knights Templars —suppressed 100 years earlier for heresy, idolatry and other misdeeds—in exchange for a vast treasure hidden in the Turkish-controlled Holy Land, to finance England’s ongoing war. Calveley’s loyalty to England and leadership ability make him a natural to head a perilous expedition through English-occupied France to the Holy Land.

Tallon excels in writing battle scenes, both on land and sea, and creates descriptive passages imbued with a strong sense of place; for example: “During the night a sea mist had rolled inland and shrouded the castle on a damp cloying cloud.” Unfortunately, these scenes prevail at the expense of plot and well-rounded characters. Although there are a few subplots, ruthlessness and fighting dominate.

Abrupt scene changes and one-dimensional portrayals involving such stock characters as a non-celibate priest, a Jewish merchant and his daughter, and a physically and mentally deformed Flemish man hamper reading enjoyment. There is also a jarring factual error (characters celebrate the feast of the Immaculate Conception on December 8, 1422 when the feast wasn’t officially announced until 1854). Additionally, a plethora of punctuation errors, run-on sentences, rudderless pronouns, and other grammatical issues make the book challenging to read.

While the novel’s conceit offers promise, the story ultimately fails to live up to its potential. Readers will find that Sir Walter Scott or Steve Berry have handled this period better.