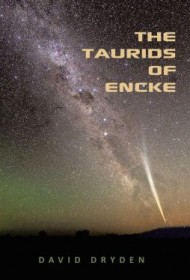 This British science fiction novel revolves around the time dilation issue – where two objects experience different rates of time flow – that was successfully dramatized by Heinlein in his 1956 classic, Time For the Stars and Stith in his 1990 Nebula-nominated Redshift Rendezvous. In this case, however, the author’s reach seems to exceed his grasp.

The book’s problems are evident in the beginning. The story opens in 2001 in Yorkshire with a muddle of characters, scenes, changing point of view and time dilation techno-babble, as the comet Encke’s meteor showers, dubbed the Taurids, create a six-mile wide time zone that’s two hours behind the rest of the planet and surrounded by a “clear block of gelatin-like substance” trapping people either inside or outside.

The protagonist, Victor, a Polish Spitfire pilot during the Battle of Britain, where he “miraculously managed to survive” this same phenomenon, does not arrive until page 33. And the real story — the promising, potentially captivating heart of the book, in which Victor and his Yorkshire fiancée Rosie become unwittingly involved in WW II espionage, followed by her mysterious disappearance that remains unresolved until the events of 2001 — doesn’t kick in until page 133.

Grammatical and editing problems add to the muddle, as do historical inconsistencies and unexamined key plot points. Victor’s “miraculous” survival is never acceptably explained. Neither “giant Luftwaffe Heinkel 177 bombers” nor “MiGs” were operational aircraft in the 1940 blitz. Peculiar clock settings, such as “12:00/09:58 Sunday, 11 November 2001,” that subtitle about half the chapters, inexplicably gain or lose minutes, months, and years on what seems to be the same day in the story. And a dollop of perplexing Yorkshire Geordie dialect further confuses things.

Burdened by ineffective plotting and the issues mentioned, the story never manages to keep its readers’ heads free from confusion and frustration. This results in a challenging read that’s unlikely to attract a wide audience.