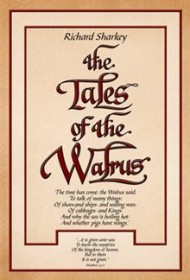 The Tales of the Walrus, by Richard Sharkey, is a small book with immense scope. In 148 pages, the book covers the formation of the continents, early American history, World Wars I and II, mythology, creation tales and the etymology of various words associated with legends and folklore.

Through much of his work, Sharkey appears to be comparing accounts of mythology to what he believes really happened. It is hard to be certain whether this is truly the author’s design because the book lacks a preface and organizing paragraphs that would indicate his intent. It also lacks the in-depth, logically sequenced arguments one would expect in a work exploring the roots of history and mythology.

Consequently, such claims as Poseidon was the leader of the “Nilotic Empire’s naval department” (referring to an ethnic group of North Africa), or that the Erinyes of Greek mythology were representations of Muria Islanders of the Arabian Sea, or that Little Red Riding Hood was originally a name for a fleet of ships from Cartagena, Colombia, leave one wondering whether this is a spoof or a work meant to be taken seriously.

The title’s reference to the Lewis Carroll poem, where shoes, ships and sealing wax are juxtaposed with proposed fantastical discussions concerning “why the sea is boiling hot and whether pigs have wings,” may give a clue to the author’s intent. Perhaps the book is to be taken as a playful artifact like the Kensington Runestone, mixing a little fact with a little fiction. If this is the author’s goal, then the puzzling claims he makes are not a problem.

If, however, the author is trying to offer a thought-provoking discussion concerning myth and history, more organization is needed, and the book’s arguments require expansion. The author needs to have a clearer vision of what he is trying to accomplish and let readers in on the secret.