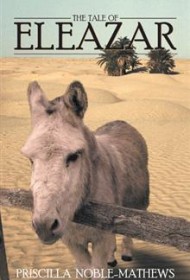 The name Eleazar is an important one in religious texts, sprinkled throughout theology and found both in the Hebrew Bible and in the King James Bible’s New Testament. But could it be there is a forgotten Eleazar? One who played a crucial role in the birth of Jesus?

In Priscilla Noble-Mathews’ charming novella, this Eleazar is the dedicated donkey who carried Mary in her long journey to Bethlehem. It is the Christmas story but told completely from the perspective of a donkey — from his carefree days of playing with a young girl he adores named Mary, through her wedding to a nice man named Joseph, and their leaving all that is familiar in Nazareth. The tale, written simply enough that it could be tackled by a young reader or certainly read to children as a bedtime story, first appeared by Noble-Mathews in Good Housekeeping magazine in 1966. A medical doctor and theologian, she has now reprised her sweet story in book form.

Although she describes herself as a “deeply committed Christian,” this is not a Bible story. What works so well and makes this appropriate for all audiences is that it is purely an animal story. There are only hints of the significance of the journey and what is to come. In one brief scene, for example, Eleazar notices that the shadow of a cross on a hillside makes Mary shudder. The name Jesus is never mentioned. There is only a donkey’s wonderment that the birth of a baby (Eleazar was tired and slept through the actual event) has caused such a stir among humans.

Some might object that there is no direct religious message. But, in fact, it is the subtlety that makes the unfolding story so delightful and ultimately meaningful. In the end this is a parable that reminds readers that love can come from where you least expect it, even a donkey.