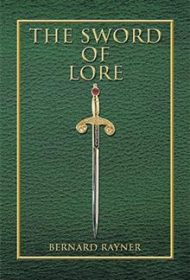 A young boy meets a dragon and learns his destiny in this complex fantasy by British author Bernard Rayner.

Erol Handler, 10, is a simple farmer’s son living in the peaceful realm of Bendem with his family, when one evening he’s astonished by the sight of “an immense object, the size of four farmhouses, hovering above him.” The “object” is the dragon Broona, whose visit is no accident. It presages a series of seismic events in the boy’s life, beginning the next day when Erol is summoned to become a squire for Duke Thomas. His father accompanies him as he begins his training for this special role.

While training, Erol falls in love with the noble elf lady Aronda and eventually learns that he has been chosen to be guardian and savior of his people after taking possession of a mystical sword, magically prepared for him long ago, known as Lore. With the sword at his command, he and his father will join their country’s leaders to destroy the evil works of Bertham, despotic ruler of the northern region of Cyrenia— a process that threatens to obliterate the planet. Always in the background is Carleon, an ancient sage who sometimes appears in the guise of a humble storyteller.

Rayner’s imaginative, well-organized saga encompasses myth, warfare and youthful romance. As soon as one problem seems solved, another arises, keeping the action constantly rolling. Between crises, there is time for pleasant courtships, lush weddings, and a coronation. Like Tolkien, Rayner draws a recognizable parallel between his fantasy world and our own earth, as it slowly develops the capacity to destroy itself with ever more powerful weapons. Carleon’s central place in the story suggests an omniscient creator.

The Sword of Lore mixes battles and perils, heroism and villainy, with deepening romantic passions and increasing understanding of the right use of power. It offers a well-conceived world of mythological creatures and likable characters that will keep readers engrossed throughout.